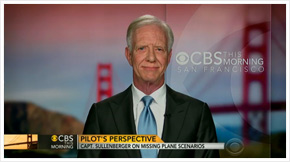 Though there is still no sign of a Malaysia Airlines Flight 370 jet that disappeared over the weekend, it’s “very clear,” according to CBS News aviation and safety expert Captain Chesley “Sully” Sullenberger, that whatever happened to the plane happened “suddenly” and “perhaps catastrophically.”

Sullenberger said absent any evidence or wreckage, all “causes should still be on the table.”

The flight from Kuala Lumpur to Beijing lost contact with ground controllers somewhere between Malaysia and Vietnam. The airline reported no distress signal had been issued.

Sullenberger said it’s possible for the plane to be in distress and no communication made with officials on the ground.

“I know exactly how the high workload and the pressure of trying to find out what’s going on, can keep a crew busy when they’re unable to communicate,” Sullenberger said.

Sullenberger, the famed captain of the “Miracle on the Hudson” flight landing in New York, explained: “What happened to us five years ago…it was actually an advantage we knew very early on what exactly caused our engines to fail — it was the bird strike — and so I didn’t have to spend a lot of time trying to figure out what happened. I was able to go straight into, how do I fix the situation? We don’t know yet how complex or ambiguous this situation that this crew may have faced.”