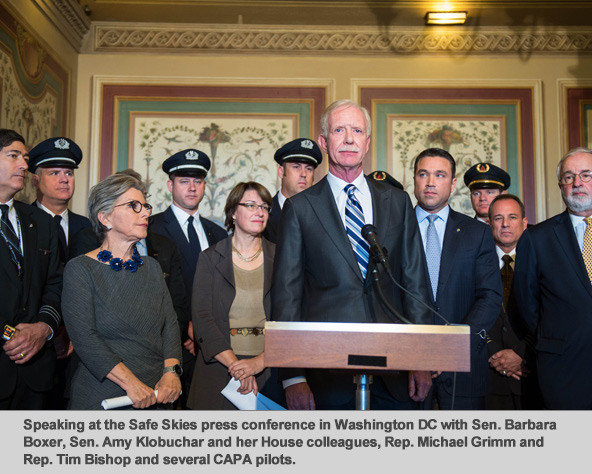 I was honored to stand with U.S. Senator Barbara Boxer and other lawmakers at the U.S. Capitol today as Sen. Boxer and her colleagues introduced the “Safe Skies Act of 2013,” legislation that will require that cargo pilots are as well-rested when they get into the cockpit as our passenger airline pilots. Put simply, this bill, supported by members of both parties, would make sure that there is one level of safety for cargo as well as for passenger flights. Currently, a loophole exempts cargo airlines from having to schedule cargo pilots using rules based on the most up-to-date science on fatigue. The Federal Aviation Administration, at the mandate of Congress, is however requiring passenger airlines to use these very rules and the same science to schedule pilots on passenger flights. This loophole must be closed. Senator Boxer is right to call this “common sense legislation.”

Pilot fatigue can have tragic consequences, as we know from the crash of Colgan Air Flight 3407 near Buffalo, N.Y. in 2009, killing all 49 onboard and one person on the ground. As Jim Hall and I wrote last month in the Wall Street Journal (WSJ Link – Click here) cargo pilots, who often fly all night, are especially susceptible to fatigue. And the latest scientific research shows that the effects of fatigue on a pilot’s fitness to fly are devastating. The recent crash of a UPS cargo jet in Alabama, killing both pilots, could have just as easily caused fatalities on the ground. In 1992, a 747 cargo jet crashed into an apartment building in Amsterdam, killing four people on board and 39 on the ground. The list goes on. When a large plane flies over your house in the middle of the night, it doesn’t matter whether it’s carrying cargo or passengers, whether you are a Democrat or a Republican – the danger is all the same if the pilots are fatigued.

I commend Senator Boxer, her Senate co-sponsors, Sen. Maria Cantwell and Sen. Amy Klobuchar and her House colleagues, Rep. Michael Grimm and Rep. Tim Bishop, for taking action to fix this critical gap in aviation safety. I encourage you to write to your Senator or Representative (http://www.contactingthecongress.org/) and express your support for the “Safe Skies Act of 2013.” You will be helping to make America’s skies safer for everyone.