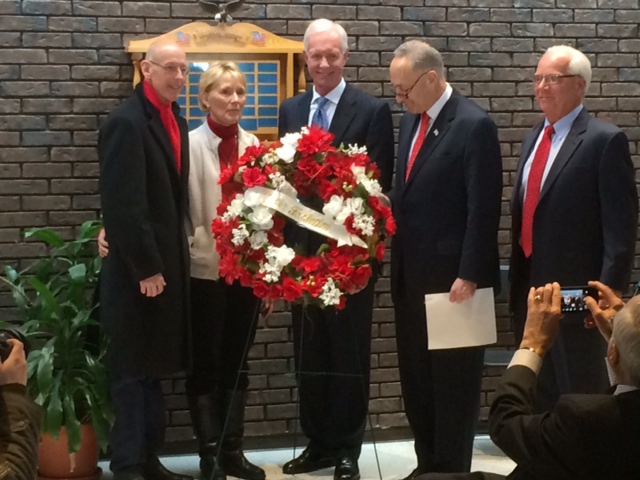 Above: Office of Senator Chuck Schumer

I’ve learned there are many types of heroism. Sometimes it is big and dramatic, and sometimes it is subtle and largely hidden from public view. But in every case, it emerges from a deep caring for others that brings out the very best in us.

My wife Lorrie and I were deeply moved at our recent meeting with the heroic Families of Continental Connection/Colgan Air Flight 3407, which crashed on approach to Buffalo, New York, six years ago today. Despite having suffered incomprehensible personal loss, these families are continuing to fight for improved airline safety so that others will not suffer as they have.

Lorrie and I stood with them and with New York Senator Chuck Schumer at a memorial event on a frigid, snowy day. We listened to their stories and looked at the photos of the spouses, parents, friends, and children they lost on a regional flight from Newark, New Jersey on February 12, 2009, killing all 49 aboard and one person on the ground.

While federal investigators found that pilot actions led to loss of control, even more concerning, they concluded that this crash was not just about one crew’s performance, but rather that the airline had critical gaps in hiring, training and resting its pilots. In short, the problems extended well beyond the cockpit of Flight 3407 and Colgan was not alone among regional carriers in lacking some of the robust safety systems of large major airlines.

In the wake of these findings, the families went to Capitol Hill. They knocked on doors at major federal agencies and met with hundreds of people, including President Obama, advocating for stricter safety measures for regional carriers. On many occasions, they got word that no sooner had they left, than airline lobbyists were scurrying all over Washington trying to weaken, delay or kill their safety efforts, because they considered them a burden or cost.

One of the most important parts of this law (which boosted minimum flight experience requirements for airline pilots from a dangerously low 250 hours to a more responsible1500 hours) went into effect just 18 months ago.

Yet the fight for flight safety is far from over because some airline industry representatives want to roll back these new and essential safety requirements.

Still, the Families of Continental Flight 3407 remain as brave as they have been since this tragedy occurred. They are now returning to Capitol Hill and continuing their efforts to improve flight safety standards. It was inspiring for me to witness the lengths to which they have gone to give meaning to their loss and improve the obvious failings in our regional airline system. And I am deeply proud to stand with them.

The airline industry, after all, has their lobbyists and trade associations, but the traveling public does not. That is why I too feel it is my duty to be an advocate for the safety of all air travelers. There can be no better way to remember and honor those who lost their lives on Flight 3407 and their families than to make sure this never happens to anyone else.