Lorrie holds Sara at our wedding reception on June 17, 1989

Above: Lorrie holds Sara at our wedding reception on June 17, 1989

The holidays remind me that the best thing we can give is often the gift of ourselves. No one knows this better than my wife, Lorrie Sullenberger, who has enjoyed a 30-year relationship with her “Little Sister” Sara, thanks to Big Brothers Big Sisters of the San Francisco Bay Area. I’m proud to share Lorrie’s guest post here.

I love the holiday season and cherish the time to celebrate with my husband, Sully, and our two wonderful daughters. Sadly, it can also be a painful time of longing for millions of children who lack stable homes. But I have learned that while none of us can change the world, each of us can change a life—and that might be the greatest thing we can give to others, and ourselves, this holiday season.

This is why I am so grateful to Big Brothers Big Sisters of America, the nation’s largest donor and volunteer supported mentoring network. For 110 years, they have been making meaningful, monitored matches between adult volunteers and children. 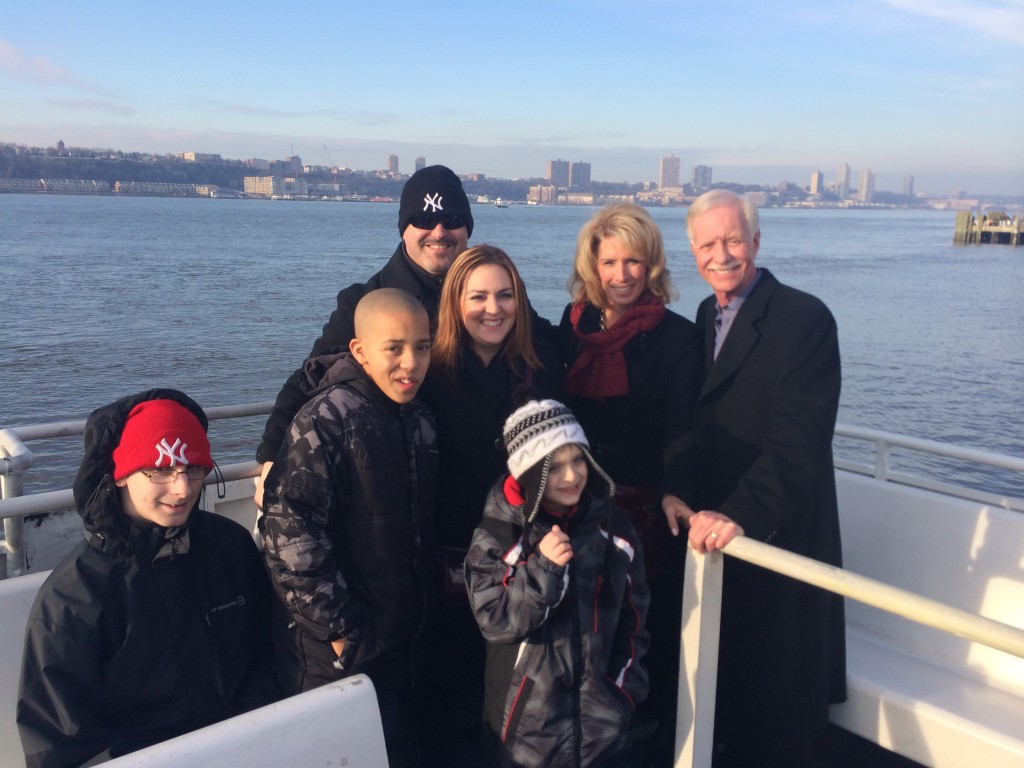 Sara and her family join Sully and Lorrie at the Hudson River for the 5th anniversary commemoration of Sully’s landing.

I met Sara 30 years ago through Big Brothers Big Sisters of the San Francisco Bay Area. She was four-years-old, had a father in prison, and a mother dealing with repercussions of traumatic brain injury. I was 25 and working for Pacific Southwest Airlines (PSA). But like Sara, I’d also had an unstable family life. My father was alcoholic and just couldn’t show up for me. So as I grew up, I sought out strong female role models wherever I could, and they made a world of difference. Now, I thought, it was time to give back.

Sara and I met every Friday night—first for dinners, then for other everyday activities. As the child of an alcoholic, I remember not having that sense of stability, of knowing that an adult would be there for me. I wanted to be that someone for Sara. She was precocious and delightfully optimistic and gave me renewed energy, even when I thought I’d given it all at work.

When Sully and I married, Sara was our flower girl. And as our own family grew, she became part of it, going on vacations together and even living with us after high school. Earlier this year, Sara and her family joined us for the fifth anniversary of Sully’s landing of US Airways Flight 1549 on the Hudson. And just last week, we celebrated with Sara, who has become a wonderful mother herself, as she and her husband welcomed their fourth child into the world. When I asked Sara as an adult what she remembered most from our time together, I thought she would say the pumpkin carving and going to Disneyland, but what she said she gained was a sense of stability and certainty. For this family, the cycle of dysfunction has been broken.

But there still are many more children who need someone to make a difference in their lives. Right now, for example, Big Brothers Big Sisters of the San Francisco Bay Area is working to recruit “Bigs” for the nearly 800 children on their waiting list, 82 percent of whom are boys.

I hope you will consider showing up for a “Little.” It only takes a four-hour commitment a month. Learn more from Big Brothers Big Sisters. And even if you are unable to mentor at this time, you can still make a big impact through a donation.

The rewards, I promise, will be unforgettable.