Capt. Sully talks about best practices for handling sick passengers on a flight 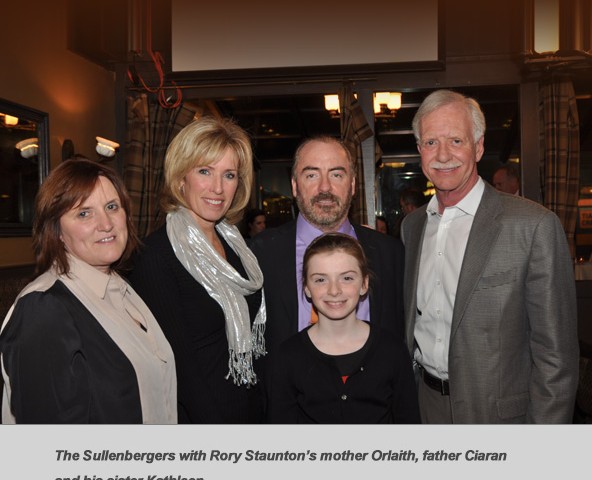 Lorrie and I had the great honor during a recent trip to New York to meet the family and friends of Rory Staunton at their family-owned O’Neill’s Irish Pub. Rory, as many of you remember, was the remarkable 12-year-old boy whose tragic death from an undiagnosed case of sepsis made national news last year. I learned from an article in the New York Times that Rory, who dreamt of becoming a pilot, was an admirer of mine.(http://www.nytimes.com/2012/07/15/opinion/sunday/dowd-the-boy-who-wanted-to-fly.html) After meeting his family and learning more about the brief but accomplished life of this outstanding young man, I am deeply humbled by Rory’s interest –and by his parents’ courage in the face of their unbearable loss.

Rory too lived with courage, gusto and integrity. By the time he reached the 6th grade, he had already captained the school debating team, led an award-winning robotics team, been elected to serve on the student council and led an anti-bullying

effort on behalf of Special Olympics New York. He had met President Obama, and once wrote to the leader of North Korea, asking why he treated his own people so badly. While other kids followed pop stars, Rory educated himself about the lives of Rosa Parks, Martin Luther King, Jr. and John F. Kennedy. Rory was on track to do great things, but his life was cut short by a preventable chain of medical errors that kept his doctors from recognizing the symptoms of a deadly infection that began after he scraped his arm in the school gym.

Inspired by their son’s activism, Rory’s parents Ciaran and Orlaith, have launched the Rory Staunton Foundation (www.Rorystaunton.com, www.facebook.com/RoryStauntonFoundation) to ensure that no child or adult dies of sepsis because medical professionals fail to realize its deadly symptoms. The Stauntons are the driving force behind “Rory’s Law”, proposed legislation that requires hospitals to tell parents what tests were performed on their child, the results of those tests and whether any tests are outstanding at the time of discharge.(http://www.nytimes.com/2012/10/26/nyregion/tale-of-rory-stauntons-death-prompts-new-medical-efforts-nationwide.html) Any one of those common-sense steps could have helped Rory’s doctors to realize he was suffering from sepsis –and to intervene to save his life, instead of sending him home from the hospital.

Despite their suffering, our evening with the Staunton family was filled more with laughter than tears. Lorrie, our girls and I enjoyed the Staunton’s warm Irish hospitality and heard wonderful stories about their beloved Rory. Like the son they honor, the Stauntons are determined to find purpose and to help others. We can all learn from their example.

The report on Capt. Sully written by Rory Staunton before his passing.

Rory’s parents shared the report he wrote in school on Capt. Sully and the “Miracle on the Hudson”. Rory wrote that he wanted to grow up to be like Capt. Sully.