Lessons Learned at Great Cost: Will We Act or Just File Them Away?

A Lifetime of Learning is a Gift 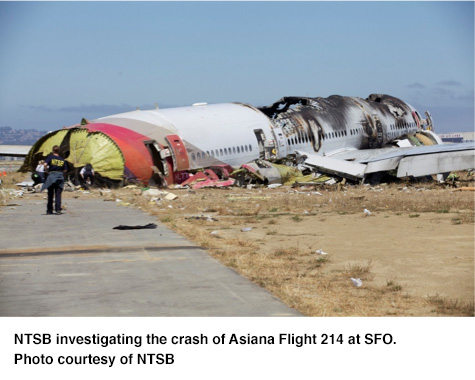 After an investigation of nearly a year, the National Transportation Safety Board (NTSB) concluded this week that the probable cause of the crash of Asiana Flight 214 at San Francisco International airport last July, killing three and injuring almost 200, was the flight crew’s mismanagement of the airplane’s descent, unintended deactivation of automatic airspeed control, inadequate monitoring of airspeed, and delayed execution of a go-around. Contributing to the accident were cockpit automation complexities that were inadequately described, nonstandard cockpit communication, inadequate training and supervision, and fatigue. Any loss of life is tragic, but it is important to keep in mind that this was an accident in which 99% of the 307 people aboard survived. It’s also a reminder that in spite of how safe, commonplace and routine air travel has become, all of us –aviation professionals as well as passengers – must do our parts to keep ourselves safe.

The formal lessons learned process we have in the U.S. through the NTSB ensures that we continue to learn from accidents and recommend improvements for safety going forward. One of the biggest mysteries about this crash for aviation professionals is how an experienced crew found themselves in a situation where they were unable to complete a visual approach on a clear day, and action to correct being too low and too slow was not begun until seconds before impact – much too late . As with every accident, the NTSB investigators look into not only what happened, but how and why it happened. In this week’s hearing we learned many of the answers to those important questions.

In aviation, we have learned that accidents are almost never the result of a single error or failure. Instead they are the result of a causal chain of events. While we have made air travel safer by using technology in an effort to reduce human error, increasing complexity and systems that are not intuitive to use can lead to the introduction of new kinds of errors.

NTSB Board Meeting on crash of Asiana Flight 214. Photo courtesy of NTSB

There are critical lessons from the Asiana crash for the traveling public too. Two of the passengers who did not survive were ejected from the airplane, apparently because they were not wearing their seatbelts. This is a reminder of the personal responsibility each passenger has to keep their seatbelt fastened throughout the flight, whether the fasten seatbelt sign is on or off. Passengers must also be responsible for knowing where the emergency exits are and how they operate, which means they must listen to the safety briefing and read the safety card in order to have the knowledge to save their lives. While the flight attendants are there for your safety, ultimately it’s up to each of us to know how to get out.

While the NTSB makes important recommendations to improve safety, it can’t mandate the adoption of these recommendations. It’s up to our nation’s aviation regulatory body, the Federal Aviation Administration (FAA), to mandate these improvements in safety. All too often the industry and its lobbyists push back hard to delay, weaken or kill safety improvements and look upon them only as a burden or a cost. I know from personal experience how reluctant the industry can be.

I was the captain of US Airways Flight 1549, and had to make an emergency landing on the Hudson River after our engines were disabled by a collision with a flock of Canada Geese. The NTSB made 35 safety recommendations as a result of its investigation of our flight, some as obvious as requiring that all passenger airliners be equipped with life vests, and not just seat cushions for floatation. It is frustrating that, to my knowledge, only two of these recommendations have been implemented by the FAA and the aviation industry. The NTSB has made 27 safety recommendations as a result of the Asiana investigation. Will these recommendations be adopted, or will they too languish only as more unkept promises to future passengers?