You Have the Power to Save Your Life 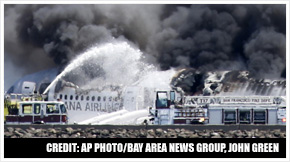 The crash is only the second major accident for the twin-engine, wide-bodied jet in the 18 years the model has been in service, aviation safety experts said.

“The 777 has a fantastic record,” said Tom Haueter, who retired last year from the National Transportation Safety Board, where he was the head of aviation accident investigations.

According to the Wall Street Journal, prior to Saturday’s deadly crash, the 777 had been one of the few long-range jets from Boeing and Airbus to have never recorded a fatality.

In 2001, a member of the ground crew at Denver International Airport was fatally injured in an incident involving a 777, but the Asiana Airlines crash is the first involving passenger fatalities, according to the Aviation Safety Network.