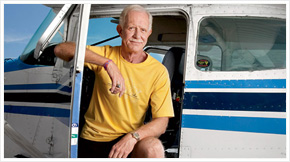 Can you tell me a little bit about your running background? When did you start running and why?

I started in about 1980. I had just left the Air Force as an air force officer and fighter pilot. When I became an airline pilot, I had a colleague who was a running partner, and we went out every morning. We’d get a good workout in before each day began. It was great to have a training partner. We were in San Diego at that point. We would run through all the beautiful areas in San Diego, like Balboa Park. And of course, the weather is so nice. As an airline pilot, I flew on the West Coast where the weather was good. That was before the big changes in our industry where we all worked extremely long hours. It used to be that you worked an early shift or a late shift and not from early to late like it is now. So you had either a chance to run before you went to work in the morning or you had a chance to run when you got to your destination late in the afternoon.

I remember having a layover in Boise, Idaho, one winter. It was icy and snowy, but the other pilot and I got dressed up in our cold-weather gear and went out. People were looking at us like, “What are you guys doing? Where are you guys from?” But there were many layovers over the years where I did that. I think it was really something easy to do as an airline pilot because we travel so much. Running is something where all you need to have is a pair of shoes and you could go anywhere. You don’t need equipment; you don’t have to carry golf clubs with you, or take your bike like some guys did. And there were so many beautiful places.

I remember being in Bellingham, Washington, north of Seattle almost to the Canadian border. It’s a harbor town, and there was a highway that went east of town and up and down some big hills. I was running with one of the other pilots and a flight attendant. I lived where it was hilly on the San Francisco Peninsula, and I’d gotten strong enough where I could pull away from them on the hills, but they would always catch me on the downhills. It was a constant game of tag, but it was beautiful. I always enjoyed being outside. I’d much rather do that than be in a gym on a treadmill. That just bores me to tears.

Capt. ‘Sully’ Sullenberger: Like Joe Biden, I Once Stuttered, Too. I Dare You to Mock Me.