A Season for Gratitude 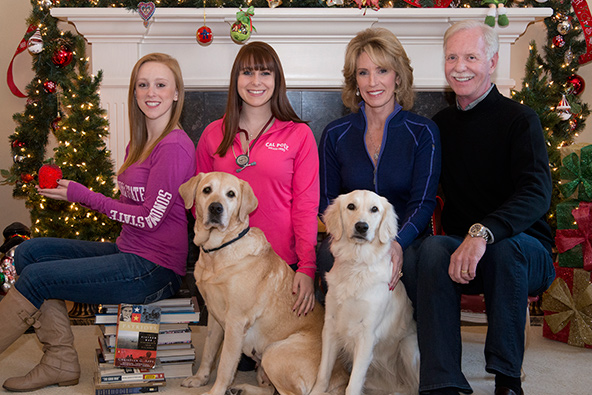 In December 2008, just a month before the event that changed our lives instantly, completely and forever, my wife Lorrie and I were hosting a holiday party. It was in the middle of the worldwide financial meltdown, and many people –especially airline families like ours – were struggling because like hundreds of thousands of other airline employees, since the 2001 terror attacks we had been hit with airline bankruptcies, huge pay cuts, and pension terminations. This second financial onslaught added to the previous economic tsunami, and despite all our efforts, our world was crumbling. We were facing selling our home and thought this would be the last Christmas in the place we loved.
In the midst of all this, Lorrie had an inspired idea. She placed a bare tree limb that had half a dozen branches in a pot, cut out paper leaves, and tied a loop of string to each one. She asked each of our guests to anonymously write something they were grateful for on a leaf and tie it to a branch. At the end of the evening, we looked at what had become our gratitude tree, covered with leaves, and were deeply moved by what we read.

One person was grateful that their mother had survived cancer. Another was grateful that a son had returned safely from Iraq. These were things we did not know about until then. During a period of economic turmoil, the gratitude tree was a moving and visible reminder of what really matters in life.

A month later, after the landing on the Hudson, we were given yet more powerful reminders of the importance of gratitude. Among the 50,000 or so letters that we received from all over the world, one was particularly touching for Lorrie and me. It was from a woman named Shirley who wrote that in 1999, her husband had died in a small plane crash not far from where we lived, leaving her to raise four children on her own. Her grief was so intense that she took all of her husband’s belongings and packed them away in the attic to spare herself reminders of him.

It was over ten years later, on Thanksgiving Day 2009, ten months after I had become a public figure, that Shirley, who had read my first book, Highest Duty, was struck by how much something about me reminded her of her late husband. Her children thought the same thing. For Christmas, Shirley went to the attic, retrieved her husband’s belongings and wrapped them as presents for her now-grown children. For each child, she created a memory box and album and placed them under the tree.

There were tears, but also laughter and warm memories as her children opened their mementos of their father. At the end of the letter, Shirley paraphrased a quote from the author Melody Beattie: “Gratitude unlocks the fullness of life. It turns what we have into enough, and more. It can turn a meal into a feast, a total stranger into a friend. Gratitude makes sense of our past, brings peace for today and helps create a vision for tomorrow. Gratitude can transform common days into thanksgivings.”

Those words still ring true. And during this holiday season, I can think of no better way to wish you and your families time to pause and to practice gratitude, and to be reminded of what really matters.

With warmest wishes from my family to yours,