Should Ukrainian airspace have been closed? 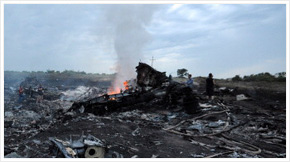 DANVILLE (CBS SF) – During a phone interview with CBS News Thursday morning, Captain Capt. Chesley “Sully” Sullenberger  was questioned why Malaysia Airlines flight 17 would be flying over Ukraine’s border with Russia despite ongoing political unrest in the area.

Sullenberger, the veteran of the 2009 Miracle on the Hudson landing, is an aviation expert for CBS News, and was asked by Anchor Scott Pelley why a commercial plane would be flying over an area where two aircraft have been shot down just this week.

“That is one of the big questions right now,” said Sully. “The U.S. Federal Aviation Administration has barred U.S. Airlines from flying over this area for some time.”

The Danville resident said that, if air traffic control personnel were using both primary and secondary radar, it’s possible that an image of a missile could have been captured on screen, if in fact that is what took down the plane.