We Must Not Forget 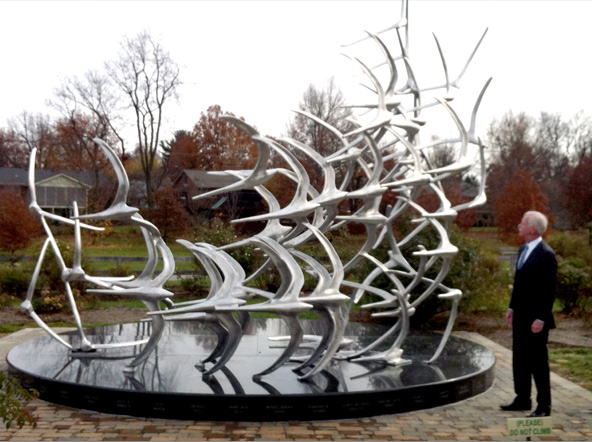 The Flight 5191 memorial outside of Lexington, KY is a reminder that aviation safety lessons all too often exact a human price. It is our responsibility to ensure that we apply the lessons for which others have paid so dearly.

This week I had the opportunity to visit the stunning memorial to Flight 5191 in Lexington, Kentucky. Forty-nine silver birds, each holding mementos of the deceased, pay tribute to the lives lost when Comair Flight 5191 attempted to take off from the incorrect runway in the early morning of August 27, 2006. Without enough distance on the runway to become airborne, the 50-seat regional jet overran the runway, collided with trees and burst into flames. All but one of those onboard the aircraft perished in the accident.

Deborah Hersman, current chairman of the National Transportation Safety Board (NTSB) and lead investigator of the Flight 5191 crash, attended the memorial unveiling last year. She and I have spoken recently and I’m very glad she uses her position and authority so effectively, pushing for solutions to systemic issues in transportation.

This week, the NTSB released its annual “2013 Most Wanted List,” categorizing the most important transportation safety issues to remedy in the year ahead. The number one item? Improving the safety of airport surface operations — a major factor in the crash of Flight 5191.

In aviation, every rule that we have, everything we know, every procedure we use, we know because someone, or often many people, died. We have learned important safety lessons purchased at great cost, sometimes literally bought in blood. We have an obligation not to forget these lessons and have to relearn them. Like the memorial in Lexington, timely action on recommendations is an important way to honor and remember those we’ve lost, and hopefully, to prevent similar accidents.

I spoke at the memorial with WKYT, the local Lexington CBS affiliate: Click Here